Whether training a child to ride a bike or training a puppy to be a good dog, a little help will go a long way (1)

Mason couldn’t wait to ride a bike.  He was nearly five years old now and could scarcely bear to watch the other neighborhood kids zipping up and down the street on their bicycles while he sat on the porch.  Mason was positive that if only he could be out there riding that surely he would beat them all if they were ever to race.  He had big ideas but first he had to learn to ride.

Mason stood over his father in the garage while his dad attached training wheels to the boy’s new bike.  “You’re ruining it, dad!  The other kids don’t have extra wheels on their bikes” Mason exclaimed.  “These wheels are only temporary, Mace.  They’re for training,” his father said.  “I don’t need any stinking training,” the boy insisted, “I’m going to be the best bike rider and I just know it!”

Mason’s dad grinned at the boy’s confidence but quickly put his foot down.  “Remember when we got Archer?” his father asked referring to the child’s dog, “Remember when he was a puppy and he kept leaving the yard and you were so scared that he’d be hit by a car?” Mason’s eyes widened as he thought of his beloved dog.  “You fixed him, dad,” the boy said.  “Well, I had help getting Archer to listen and to obey,” his dad continued, “I had his training collar.  Archer only wore it for a little while and when he became a better dog he didn’t need it anymore just like when you become a better bike rider you won’t need the training wheels anymore.”

Mason gave the wheels a second look.  “That training collar turned Archer into the greatest dog on the planet, dad,” the boy said, “Maybe the extra wheels will turn me into the fastest bike rider!”  “Maybe,” his father replied as he was readying Mason’s helmet.  The boy furrowed his brow and asked, “Do I have to wear that?” 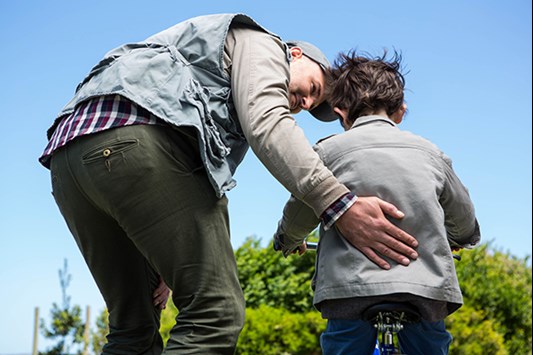