“What are the odds?”  That’s the question that spilled out of my mouth after I dropped my cell phone into a nearly full, thirty-two ounce cup of water.  It’s the same question I asked when the representative who sold me the phone asked if I wanted a model that was waterproof.  I have plenty of waterproof things in my life that I deem necessary like my hiking boots, my dog’s waterproof collar and my wristwatch but I nevertheless declined the more expensive waterproof phone reasoning that I’m rarely in situations that would find my phone in jeopardy of getting wet.  That was then this is now.

The coffee table that is my reliable resting place for my beverages when I’m relaxing is a solid two feet long and four feet wide.  It’s a large and sturdy piece that sits in front of my couch.  Usually it’s covered in candy wrappers, magazines and unopened mail, however, these things were noticeably absent on the day that my phone took a swan dive into my drink.

It was a bare table save for the John Cena Big Gulp collector’s cup that I was using for my beverage of choice, ice water.  Cena looked lonely on that table and I swear that he taunted that phone right out of my hand and into his icy water with his signature move.  A move where the WWE wrestler waves his big, meaty hand back and forth in front of his face and says “You can’t see me”.   The phone seemed to say “Oh, yes I can” and proceed to gracefully slip out of my hand and into the water.  It looked as if it happened in slow motion.  The phone looked like an Olympic high diver elegantly diving into the water with nary a splash.  I swear it wearing a Speedo.  What are the odds that the phone could have landed anywhere on the large table but instead chose the sole object that it should avoid as its landing strip?

I did what I could for the phone but of course one can only do so much in this situation.  I buried it in rice for a good while and crossed my fingers.  The next day the phone worked.  Sort of.  It would go in and out of speaker mode and make random calls.  One such call was to Patti LaBelle.  Not the Patti LaBelle, of course, but rather an annoyed woman from Pittsburgh with the same name who was not amused by my several accidental calls.  Patti and I both decided that it was time for me to get a new phone.

What are the odds that my new model will be waterproof? 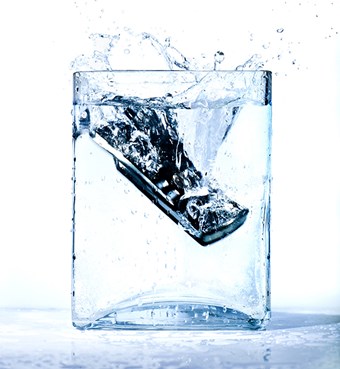