Domestic livestock are often thought of as work animals.  They provide a necessary task that can be done with little or no resistance.  Horses, oxen, and mules come to mind immediately.  However, how many of us have ever thought of a canine as a work animal?  Very few, no doubt.  Yet there is one such instance where several canines came together as a team to work their way into the history books.

Today we call it the Iditarod race, but over 90 years ago it was a life or death situation and the working dog showed how valuable they can be.  Today the iconic Iditarod race pits men and their dogs against the unforgiving polar climate in the sub arctic landscape of Alaska. Teams of loyal dogs work tirelessly to be the first to cross the finish line for the most coveted award in the sled dog universe.  Indeed, this is work for a dog of any caliber or breed. So let there be no doubt in your mind that what these dogs are doing, and have done from the beginning, is work and not play.  Original characters, whose names are still echoed amongst dog lovers near and far, performed the first death defying spectacle in 1925.   And, believe it or not, these characters thread their way through Cleveland, Ohio, Los Angeles, vaudeville, and finally back to Alaska.

The Iditarod is raced every year to commemorate the brave efforts of several sled dog teams tasked with delivering a much needed supply of medicine for an ailing remote village.  A quick survey of this historical event tells us that among a multitude of lead sled dogs, only two stand out. 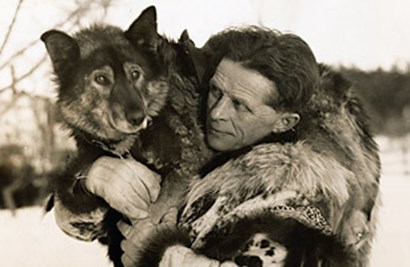 The two most notable are Togo and Balto.   Balto is the most acclaimed dog because he arrived in Nome with the serum in tow, climaxing a 674 mile journey by a multitude of sled dog teams.  This is significant because the national media were enthralled with the story of dying people anxiously waiting for the serum.  Millions of people in the lower 48 read in amazement of the life and death adventure taking place in a largely unknown region neighboring Canada.  Newspaper editors, Hollywood script writers, public relations professionals, and radio personalities boiled the story down to one sled dog team.  The lead dog happened to be Balto.  Much to his chagrin, Leonhard Seppalla’s lead dog, Togo, was overlooked entirely.

Stardom thrusted Balto all the way to Hollywood and he made regular appearances with Hollywood’s brightest star, Mary Pickford.  But his rise to stardom was short lived because in less than two years Balto ended up being featured in a lowly vaudeville performance reenacting the story in a hot dingy tent in Los Angles.

At the other end of the attention spectrum was a lead dog by the name of Togo.  When the sprint to save Nome was underway, Togo was 12 years old and had a sterling reputation as both a lead sled dog and as a helpful guide for polar expeditions.  His musher was a man by the name of Leonhard Seppala, who was famous in his own right.  Seppala’s superior skill in recognizing a great sled dog leader led him to believe, quite ironically, that Balto was not worth the effort to train him.

His bias was justified by the following facts and figures.  Seppala’s team, with Togo at the lead, ran a total of over 260 miles, which is 5 times the distance of Balto.  When the relay started, Seppala and Togo traveled 200 miles east from Nome to take the hand off, then traveled over 60 miles in 85 below wind chill and over a dangerous frozen bay.  To rub salt into the wound, Balto was given credit for nearly all of Togo’s exploits as the best lead dog in Alaska.

In the end though, Togo got his deserved recognition.   A few months later, Seppala went down to the lower 48 with several goals in mind.  One, he sought the recognition that Togo warranted;  2) he wanted to introduce and seek formal recognition by AKC of the Siberian Husky breed; and 3) to breed Togo. He succeeded with all his goals.  Sadly though, Togo passed shortly thereafter, but his mount found its way to the Iditarod Trail Headquarters in Wasilla, Alaska where it remains to this day. While Togo has descendants that still race, Balto on the other hand endured a much sadder demise.

Shortly after his vaudeville stint, he was recognized by a Cleveland business man who decided that Balto deserved better.  In great haste he raised the necessary funds to buy him and take him to his new home at the Cleveland Zoo where he was the star attraction for many years.  By 1933, (by virtue of his underserved notoriety)  Balto had a statue in Central Park New York, and upon his passing his mount became a permanent display at the Cleveland Museum of Natural History.

While one dog still lives on in disproportionate legacy, at least both can claim that they were working dogs whose efforts will soon not be forgotten.  Your masters were well pleased, and so are we after all these years.   Well done Balto, and Togo.  Well done.