America and Her Equine Friends (1)

America would not be possible without the help of her equine friends.  During the Revolutionary war many of America’s Founding Fathers were spared from British forces thanks to hard-riding, hero horses.

In the midst of the Revolutionary war, Virginia Militia Captain Jack Jouett Jr. and his horse were instrumental in saving Thomas Jefferson and others from British capture.  On June 3, 1781, Jouette was having an ale at the Cuckoo Tavern near Charlottesville, Virginia when he heard a large contingent of troops approaching.  As the soldiers neared, he saw that they were British.  Jouette quickly realized that these troops were headed toward Monticello, Thomas Jefferson’s nearby estate.  The soldiers were going to arrest Jefferson on charges of treason against England. 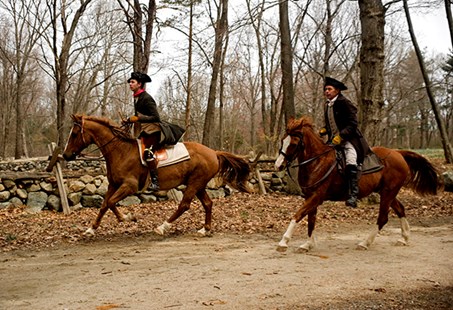 Jouette mounted his horse and planned to warn nearby residents, as well as Jefferson, about the British troops heading toward Monticello.  Because the soldiers traveled by road, Jouette had to travel through 40 miles of harsh countryside to reduce the risk of capture.  Jouette spent hours in the saddle.  He arrived at Monticello in the dark, early morning.  Jouette and his horse managed to outride the troops and warn Jefferson in time.

On April 16th, 1775, Paul Revere began to gather tips that a raid was planned for the city of Concord in the coming days.  With this intelligence, Revere began making plans to alert the surrounding countryside by horseback that the redcoats would indeed be arriving to ransack their military supplies.  Revere not only warned the citizens of the impending attack, he also rode to Lexington and persuaded John Hancock and Samuel Adams, two of America’s founding fathers, to flee and avoid capture.

A hurry of hoofs in a village-street,
A shape in the moonlight, a bulk in the dark,
And beneath from the pebbles, in passing, a spark
Struck out by a steed that flies fearless and fleet:
That was all! And yet, through the gloom and the light,
The fate of a nation was riding that night;
And the spark struck out by that steed, in his flight,
Kindled the land into flame with its heat.

Americans and horses have always had a special relationship.  Celebrate our shared history with American themed tack made from BioThane coated webbing – the cleanable, durable and waterproof horse tack.