Why Reflective Dog Collars are Important

Doug loosened his collar as he punched out for the day.  His shift at the used car lot ended and all the eight-year old Rottweiler could think of was having some fun.  It had been a beautiful sunny day and Doug wanted to play.  He knew that his buddies would be at the dog park and Doug couldn’t wait to join them. 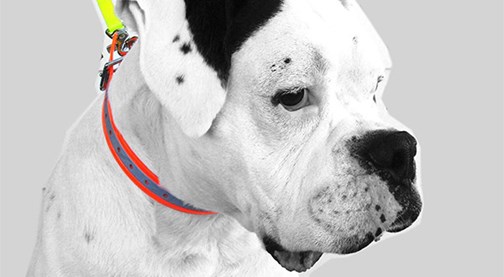 The sky, though still light, was taking on an evening look as Doug headed toward The Hydrant, a local dog park popular with working-class hounds from the neighborhood.  As he entered through the gate, Mick, a Dalmatian retired from the city fire department, shielded his eyes.  “Geez, Doug, I could see you from a mile away!  That collar sure is bright!  I’m gonna need sunglasses if I’m gonna be chasing tennis balls with you!” Mick exclaimed.  “Yeah, yeah.  It’s a new, reflective collar.  Just break out the Frisbee would ya?” said Doug.

“Mick’s right, you’re blinding me over here!” said Carl, an unemployed Pug and also a park regular.  “What’s with the flashy neckwear, eh Doug?” he continued.  “I’m gonna tell you a story, Carl,” explained Doug.  “The other night I was walking home after a good run at the park.  I was crossing Barkview Lane when I hear the loud horn of a car.  The guy driving came to close to hittin’ me but thankfully he saw me at the last minute and laid on his horn.  The whole episode gave me a good scare,” Doug said as he finished the story.

“For the love of Lassie!” cried Carl, “that’s some story, Doug, but it still doesn’t explain the bright collar.” “Carl, you’re missing the point.  That driver almost didn’t see me,” Doug explained.  “Don’t you get it? The driver would have seen me from a great distance if I was wearing one of these!” Doug said as he tugged on his reflective collar.  “When I heard about BioThane reflective dog collars, my tail started waggin’ and I wasted no time in getting’ one for myself,” he continued.  “These BioThane collars will not only save your life but they’re also easy to clean so they aren’t funky smellin’ like that rat-catcher you wear around your neck, Carl,” laughed Doug.

“O.K. you sold me.  Where can I get one of these collars?” asked Carl.  “That’s easy, just go here and check out their line of reflective dog collars,” answered Doug, “and you, too, can be as safe and flashy as I am!”